Demanding governments to having a people-centred approach to development

More than 100 civil society organisations, activists and human rights defenders from New York and across the globe gathered yesterday, Sunday, 15 July at a “Ground Level Peoples’ Forum” (GLPF) to share their struggles and reflect on the rise of macho fascist politics, amidst the growing levels of inequality and the climate crisis. The peoples’ movement gathered and vowed to find ways to work together in the future and hold governments accountable for their commitment to sustainable development. The event was held as a counter space to the High Level Political Forum at United Nations where governments have come together to discuss sustainable development without any space for civil society and grassroots communities to voice their concerns and the realities on the ground.

Groups at GLPF said a vision of people-centered development solution that works for those at the margins of society is crucial, especially because billions of people and communities are impacted by the current development model where wealth inequality is rising, climate and environmental crises is escalating and grabbing of land and resources is rampant. “The current economic growth is contrary to the sustainable management of our resources, that Indigenous peoples especially, have been carrying out since time immemorial. It has exacerbated land and resource grabbing and prowled on the exploitation of peoples and women. We desperately need a new development paradigm, one that is built upon development justice and the voices, decision-making and agency of the most grassroots and marginalised communities as well as indigenous peoples,” said Virginia Dammay, Innabuyong, Philippines.

“The current economic growth is contrary to the sustainable management of our resources, that Indigenous peoples especially, have been carrying out since time immemorial.”

Peoples’ movement also expressed concernsabout the rise of macho-fascist governments, collusion with big corporations and rising attacks on human rights defenders. “From Latin America, to Asia and the Pacific, to Africa and here in the US, macho-fascist regimes are everywhere. They are rising against women, against peoples’ movements, against communities and against human rights. These macho-fascist regimes are always in cahoot with corporations, pushing for neoliberal agendas and create an environment of endless political repression that is threatening and killing human rights defenders and activists everywhere,” said Mabel Bianco, Fundación para Estudio e Investigación de la Mujer (FEIM),  Argentina.

Activists and rights-defenders are in the process of building stronger relationship between movements across the globe to fight the current unjust system. “Many governments ‘attempt’ to solve the issues of poverty and oppression with band-aid solutions that do not address the structures and systems that are the actual root cause of the problem. Often, these systems are not addressed because they are the very structure the government itself is standing upon. The only way to solve these issues is for the power to be in the hands of the people and communities affected.” said Raphael Agosto-Miranda, New York Boricua Resistance, New York. “Yet whenever and wherever marginalised communities begin to take back their power, we see the attacks on them intensify. Our solution is to connect, learn from, and stand with one another against our common enemy, imperialism. GLPF is an important space because it helps connect movements from around the world. The voices of the peoples’ must be heard and that’s only possible through international solidarity,” added Raphael Agosto-Miranda.

Peoples’ movements also marched to the Dag Hammarskjold Plaza chanting slogans “From NY to the Global South – Rise Up,  Fist Up, for System Change!” The action at the Plaza featured speeches from activists and human rights defenders from around the world, sharing the stories of communities and their fight to defend their rights. It also featured political cultural performances from groups and communities from all over the world.

The peoples’ movements reiterated that the demand for a new, fairer approach to development has become stronger and cannot be ignored by governments anymore. Before it’s too late for our planet and for its peoples’, governments must listen to people and communities for just and equitable development. 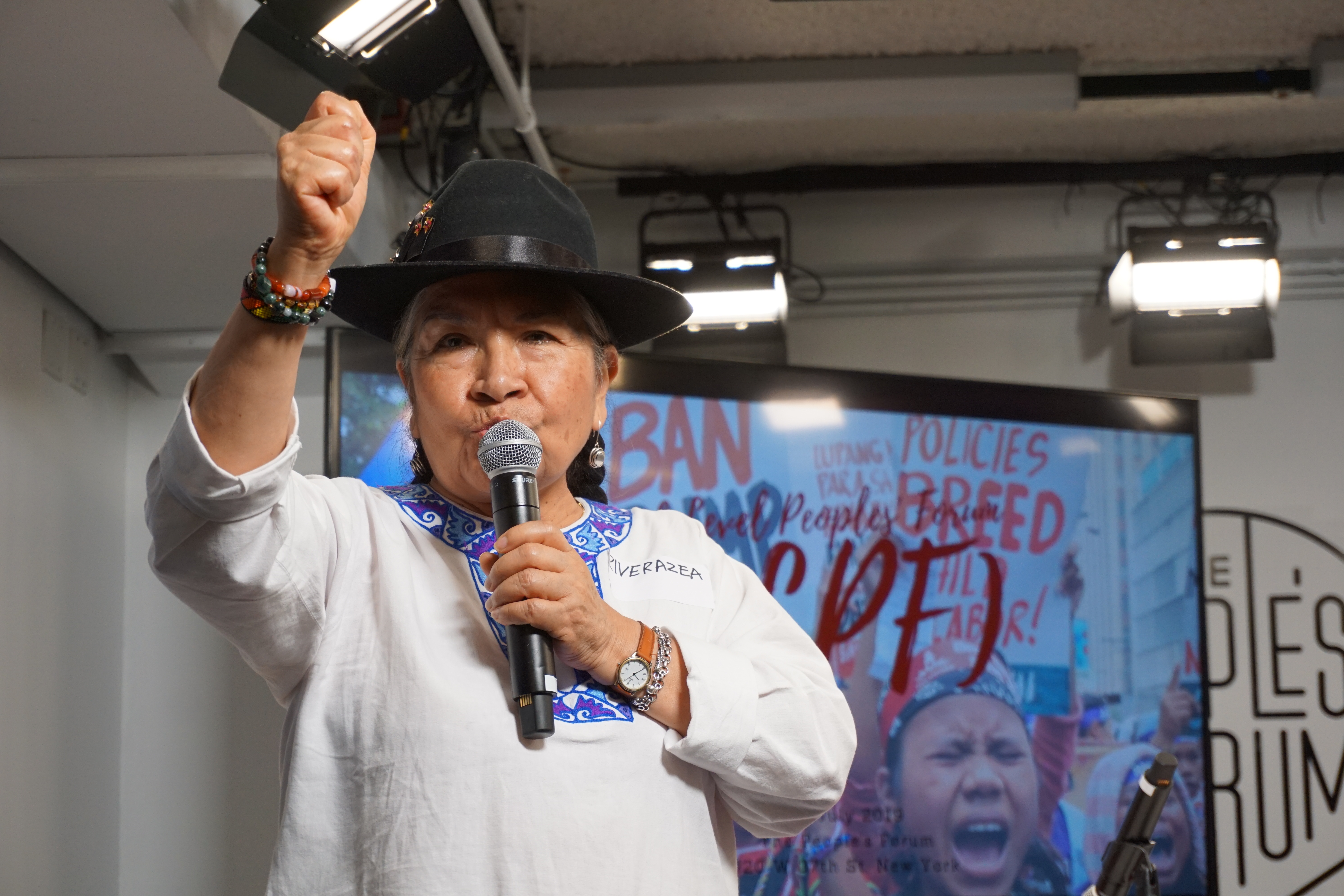 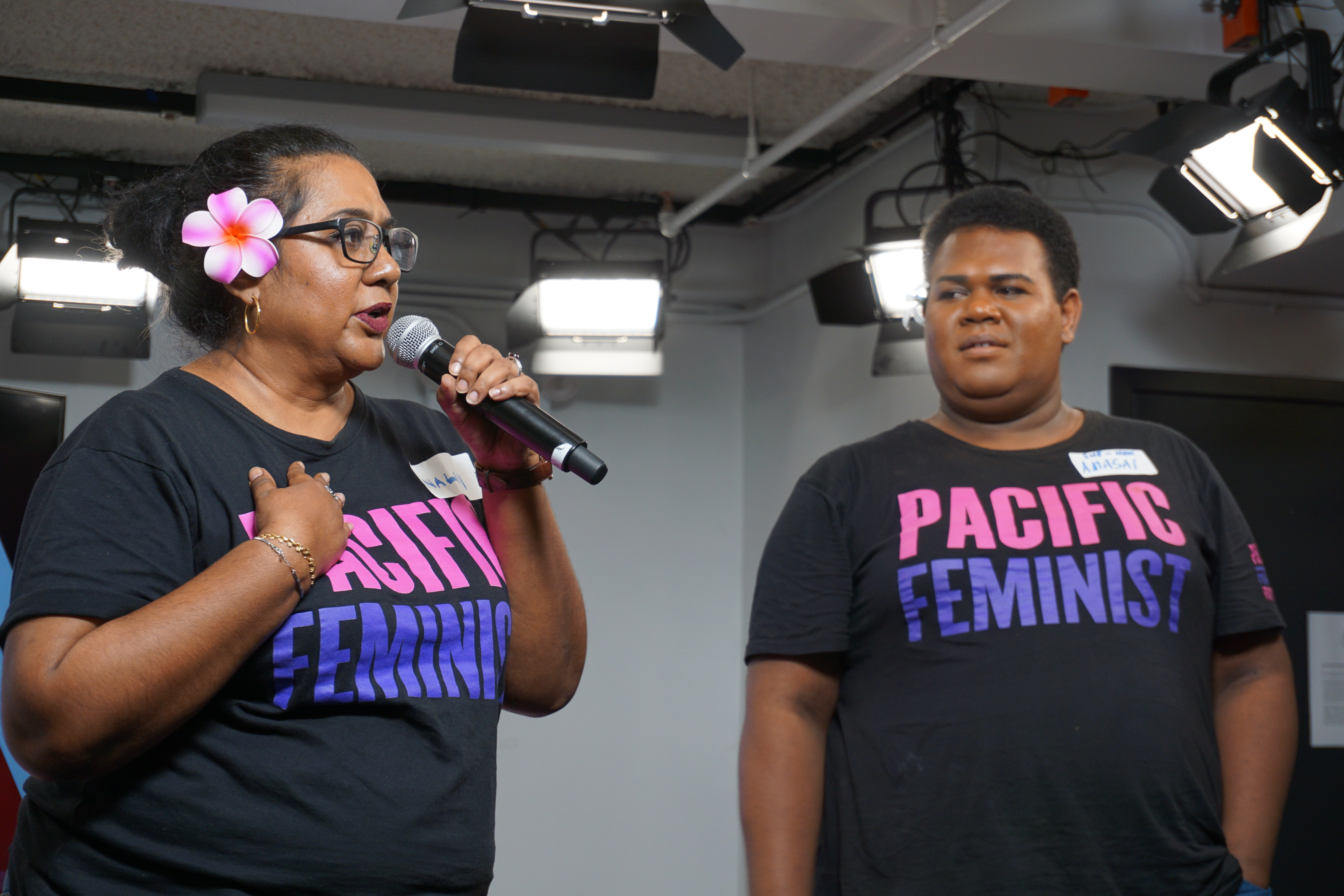 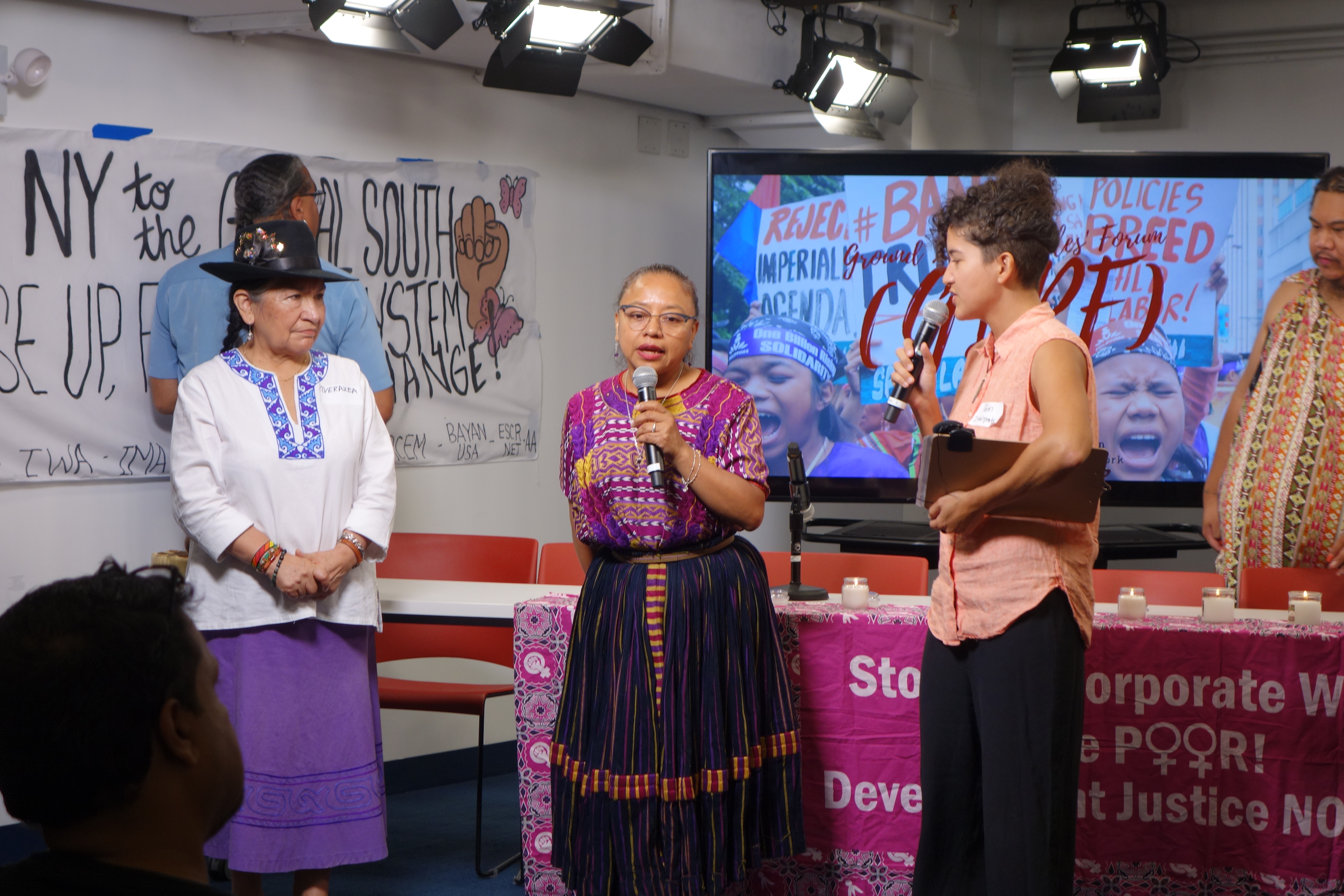 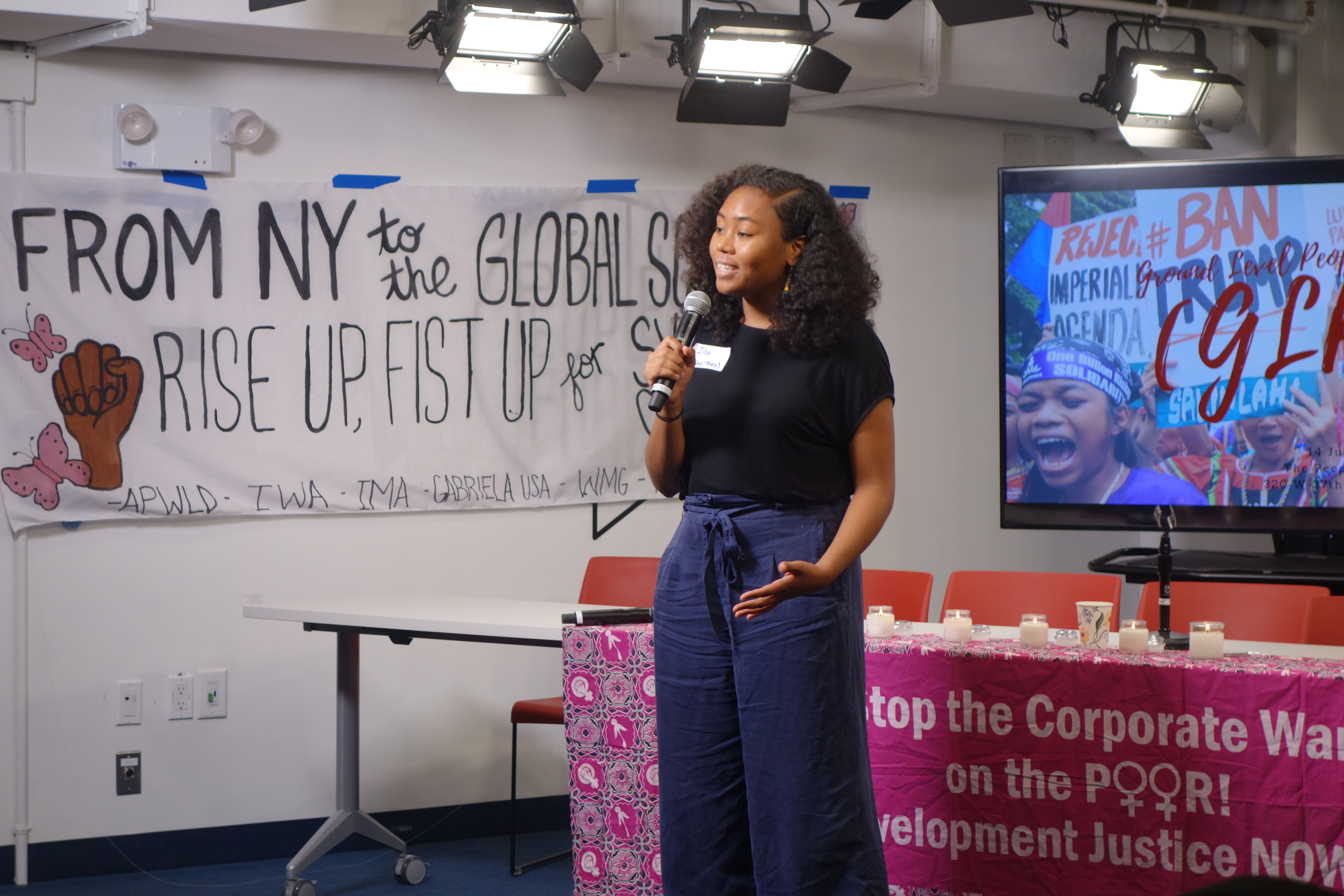 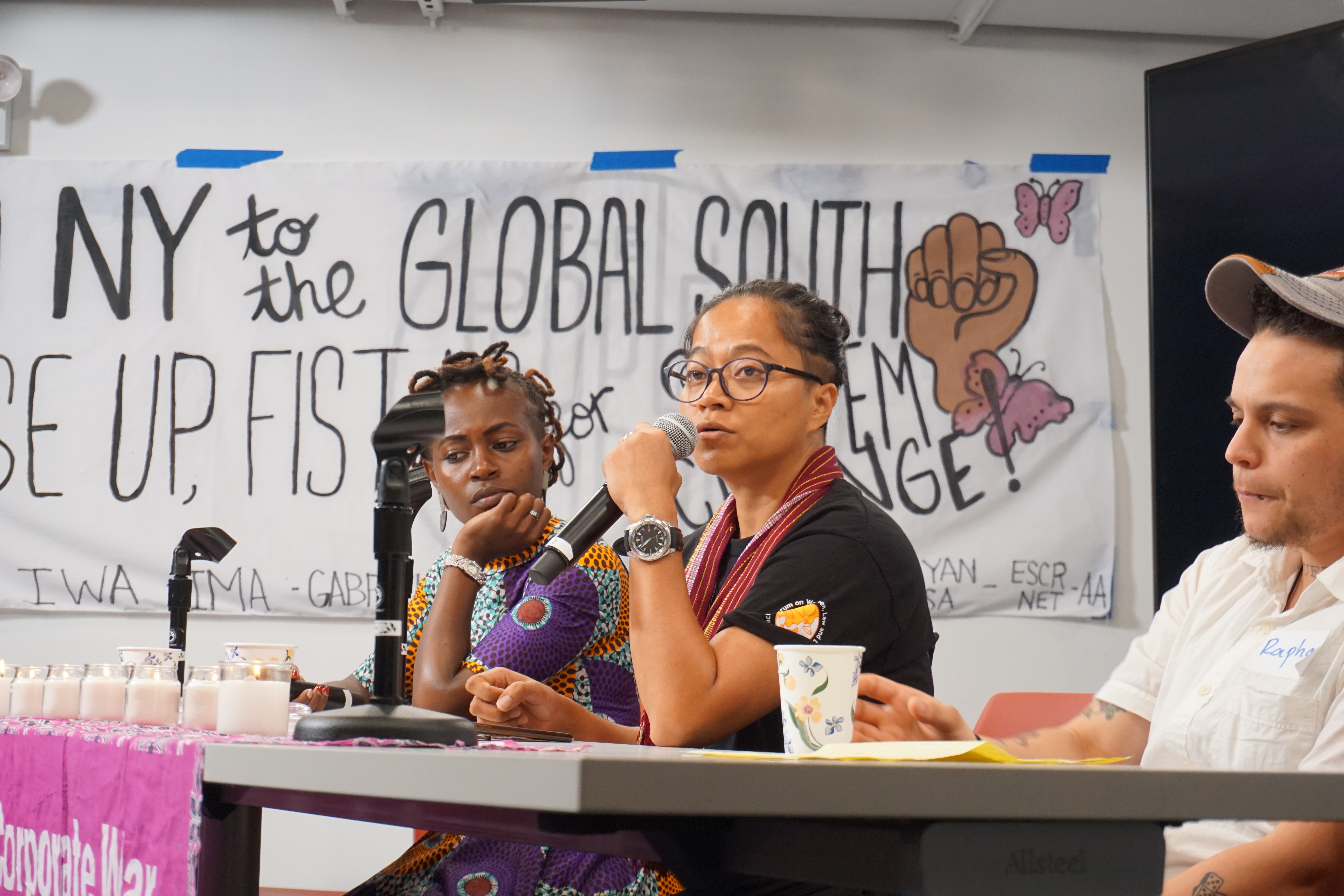 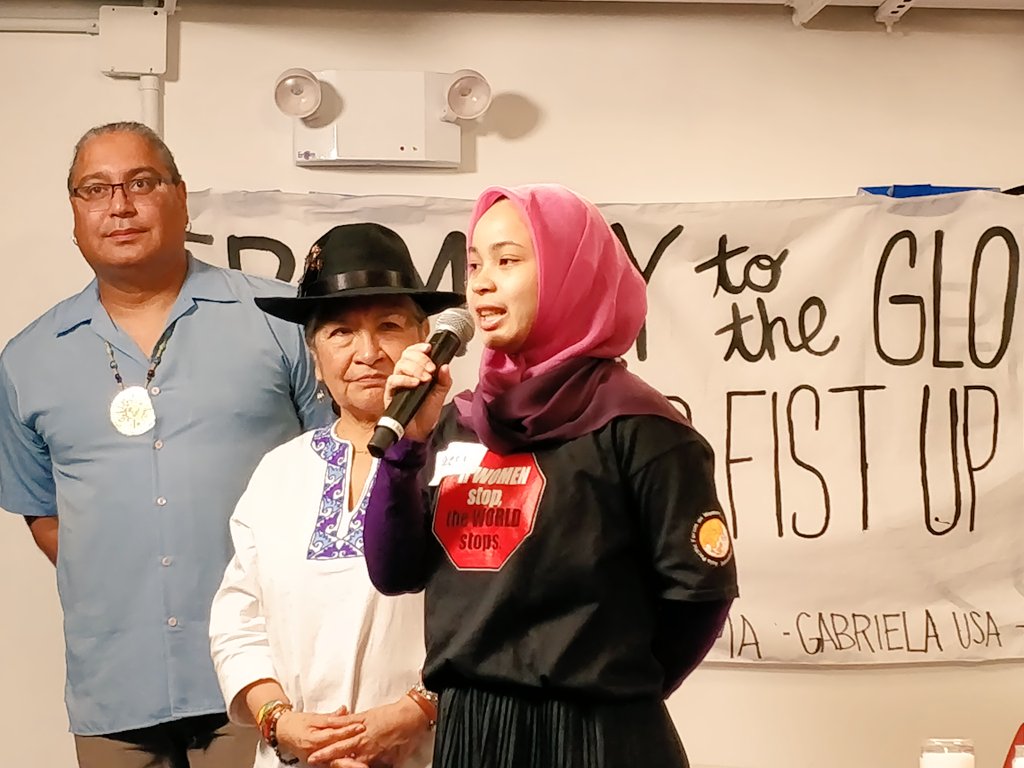 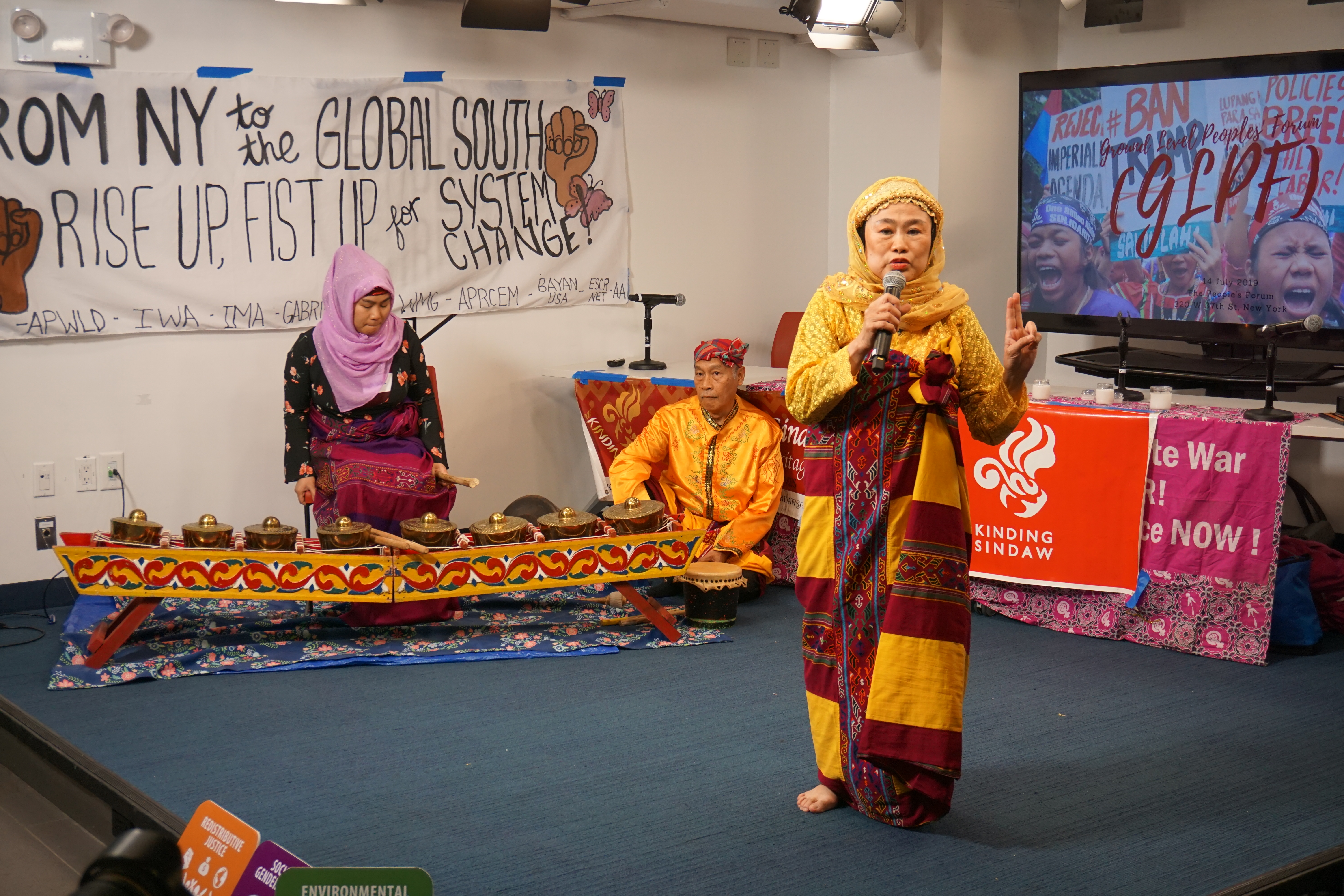 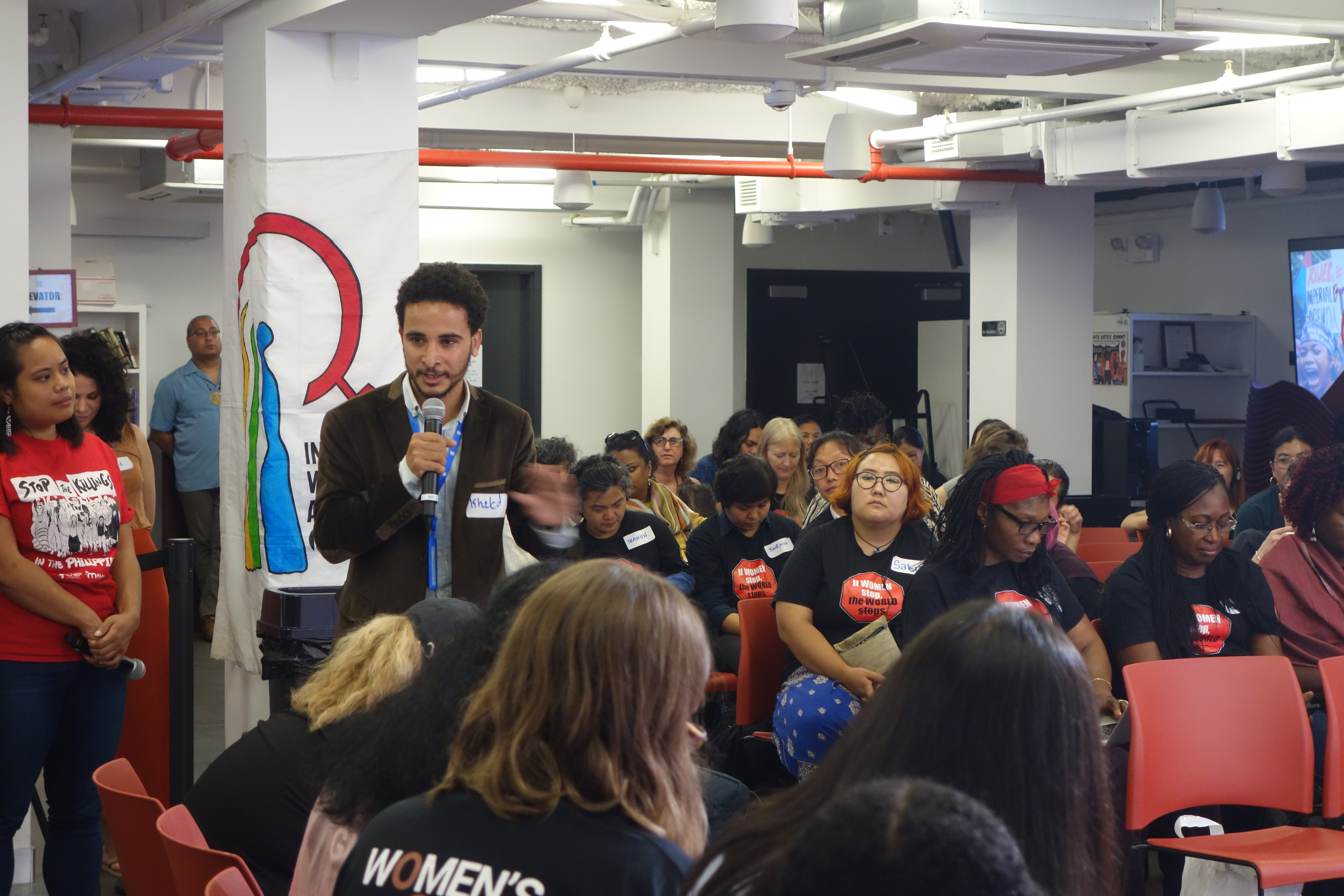 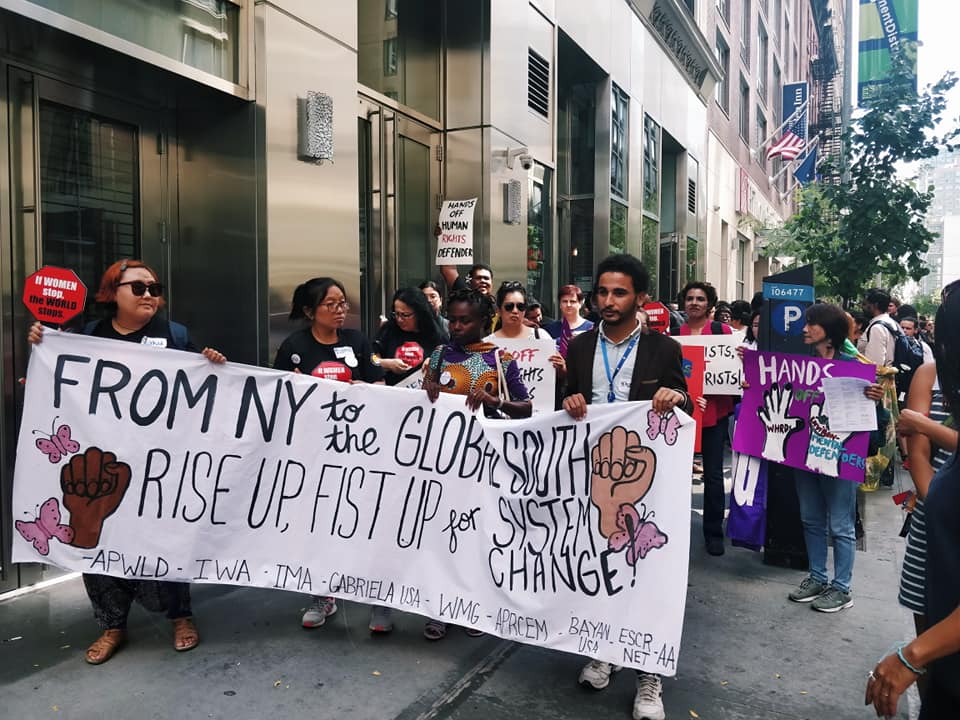 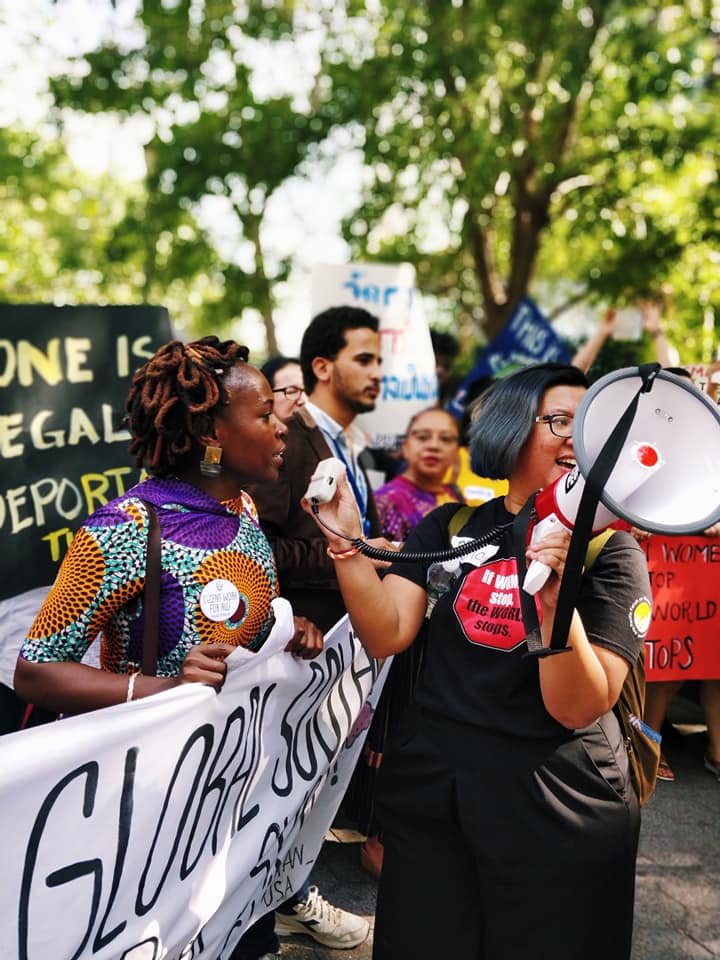 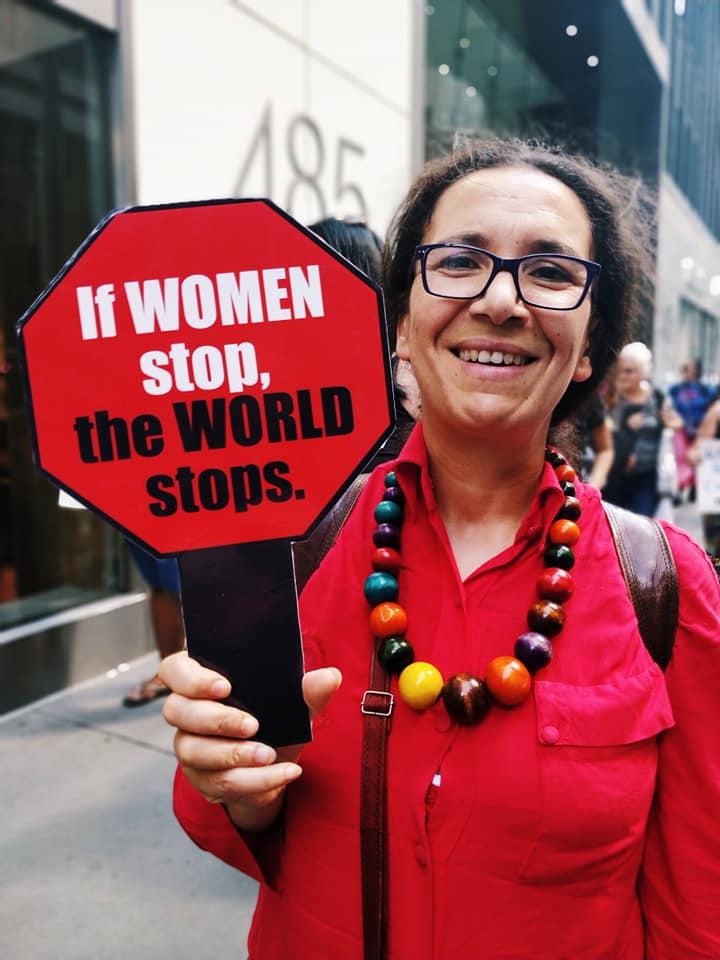 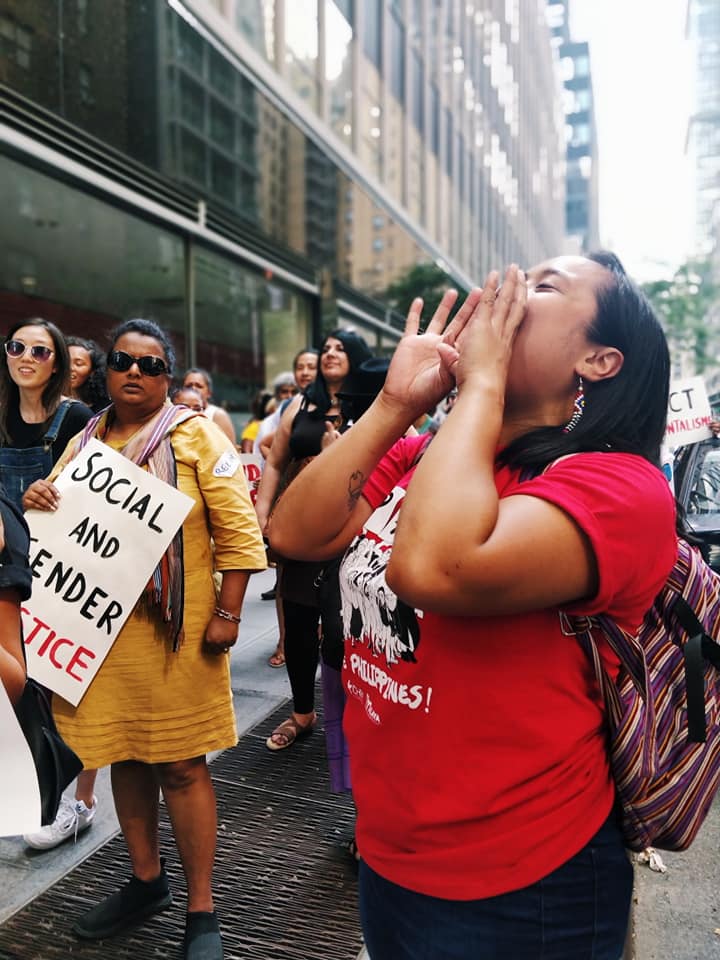 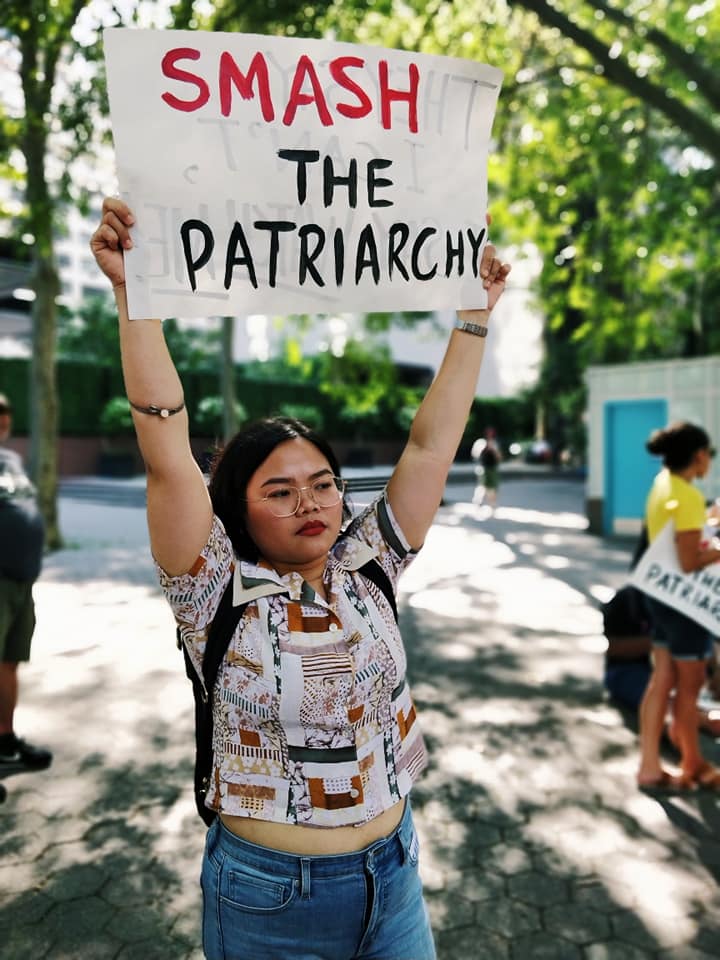 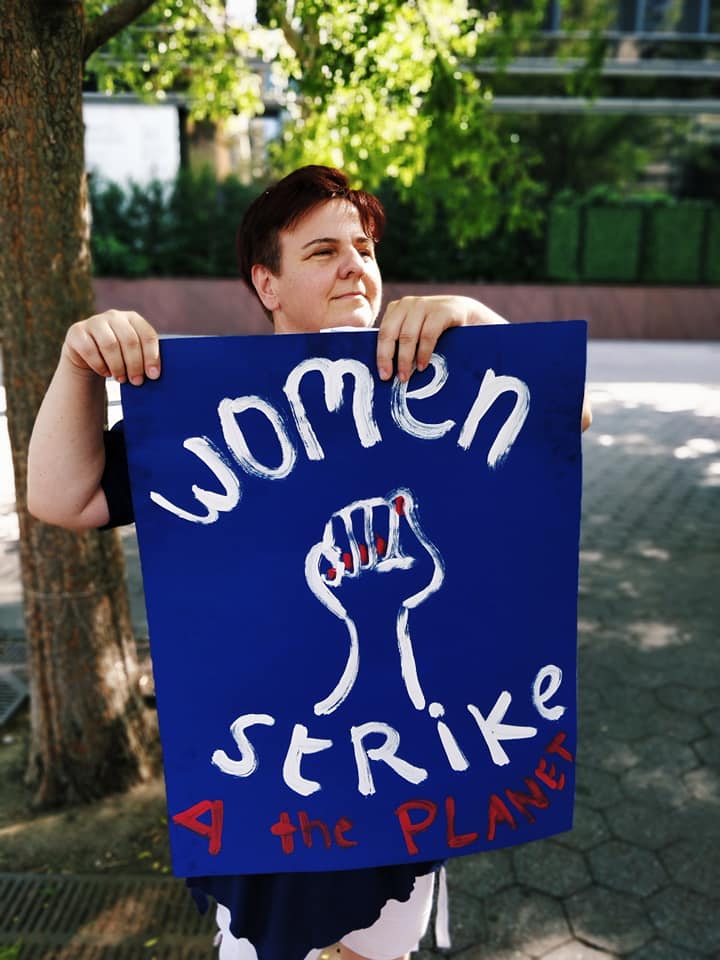 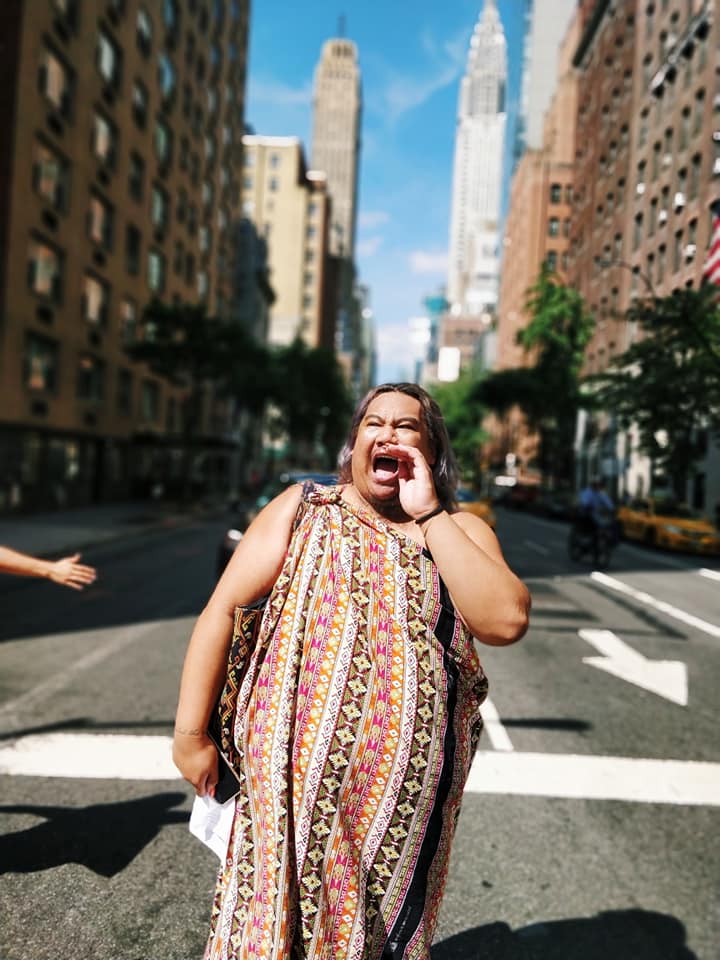 Interactive and full of exciting powerful speakers and a mobilisation, the Ground Level Peoples’ Forum (GLPF) brings together civil society and peoples’ movements to share their struggles and resistances, and hold governments accountable for the commitments that they have made for sustainable development. Attacks against the working class and human rights defenders are worsening under increasingly macho-fascist governments. Neoliberal capitalism continues to reinforces patriarchy, perpetuate wealth inequalities, climate crisis, land and resource grabbing, trade wars, militarism and proxy-wars. It is increasingly important to build solidarity between movements – feminists, migrants, dalits, refugees, trade unions and workers, indigenous peoples, farmers, urban poor, diaspora, and much more – from New York to the Global South. The forum will aim to create a space to address these concerns and demand for development justice. Click herefor more information.