[NEW YORK, NEW YORK] Feminist activists at the United Nations will speak out today against sexism and oppression in the workplace, to remind diplomats that in the global workforce,  “When women stop, the world stops.” At 2:30pm on Wednesday, women in the main lobby of the UN all will halt in their steps, freezing in place to symbolize the power of women’s labor strikes. The action will also be a preview for the Women’s Global Strikeon March 8, 2020, where women around the world will be walking out of work, withdrawing from care work and organising rallies to protest continued violence and discrimination. March 8th marks International Women’s Day each year.

The United Nations Headquarters in New York City is currently hosting the High-Level Political Forumon Sustainable Development, a two-week global forum to review progress made on the Sustainable Development Goals for 2030. With ambitious goals of ending gender inequality, halting climate change, and providing universal education and decent work for all, the forum is the annual moment for diplomats and governments to assess shortcomings and progress on the goals. Wednesday’s discussions will revolve around Goal 8, which includes a call for “full and productive employment and decent work for all.” The Women’s Major Group (WMG), a collective of feminist organizations that advocate for women’s rights within the Forum, believe that the progress on Goal 8 has been abysmal.

Mara Dolan, a spokesperson for the WMG said, “Women continue to perform the vast majority of the world’s unpaid or underpaid labor. They experience devastating wage gaps, discrimination, sexual violence, and poor or nonexistent labor protections. These realities are even harsher for women in the Global South, and those from vulnerable groups. Unions and rights to collective bargaining and association around the world are consistently under attack by governments and corporate greed, and women refuse to be silent about it.” Dolan said she hopes the action will draw diplomats’ attention to the role women hold in the labor force and Goal 8, and raise awareness for the March 8 global strike.

Following the action, the Women’s Major Group will continue its advocacy for the remainder of the conference, pushing for outcomes that honor women’s rights and human rights.

ABOUT THE WOMEN’S MAJOR GROUP:

The Women’s Major Group (WMG) was created at the 1992 Earth Summit in Rio de Janeiro, Brazil, where governments recognized Women as one of the nine important groups in society for achieving sustainable development. The WMG is an official participant in the United Nations processes on Sustainable Development. Other processes use the major group or similar systems, with the WMG active in the processes of the United Nations Environment Program since 1996. The Women’s Major Group has the responsibility to facilitate women’s civil society active participation, information sharing and input into the policy space provided by the United Nations (e.g., participation, speaking, submission of proposals, access to documents, development of sessions). The WMG is self-organised and open to all interested organisations working to promote human rights-based sustainable development with a focus on women’s human rights, the empowerment of women and gender equality.

ABOUT THE WOMEN’S GLOBAL STRIKE:

Feminist organisations and allies from around the world have launched a campaign calling for a ‘Women’s Global Strike’on 8 March 2020. The promises made by our governments to advance equality, development and peace for all women 25 years ago in Beijing have not been kept. We have chosen International Women’s Day to go a strike since historically on this day, women over generations have risen up and protested, putting their lives at risk to defend civil rights and fundamental freedoms. We want to reclaim the day and revive women’s collective power to demand our human rights. 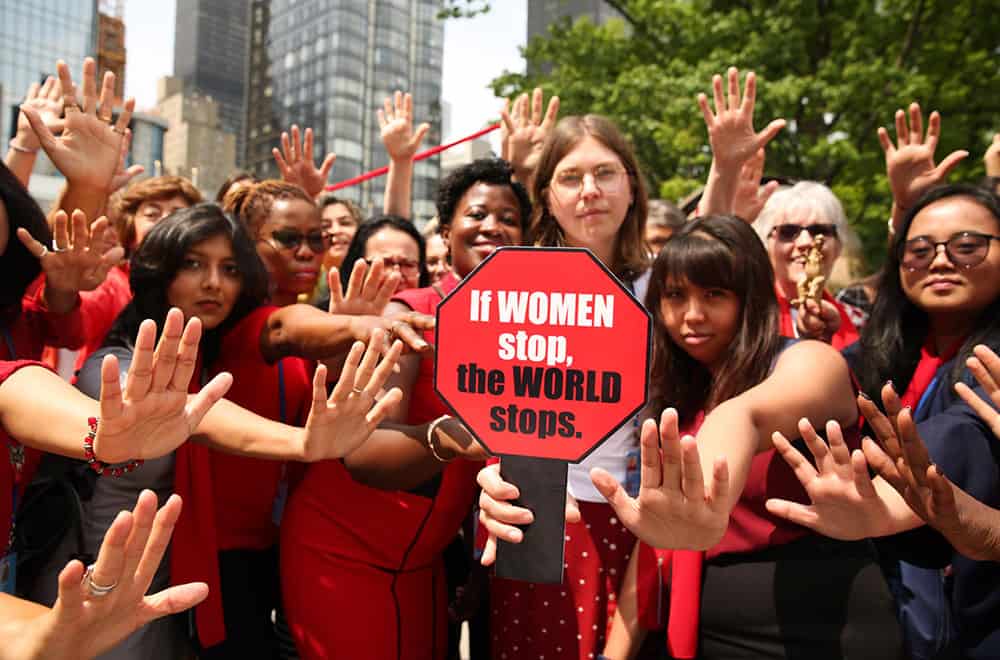 Photo by IISD/ENB | Kiara Worth 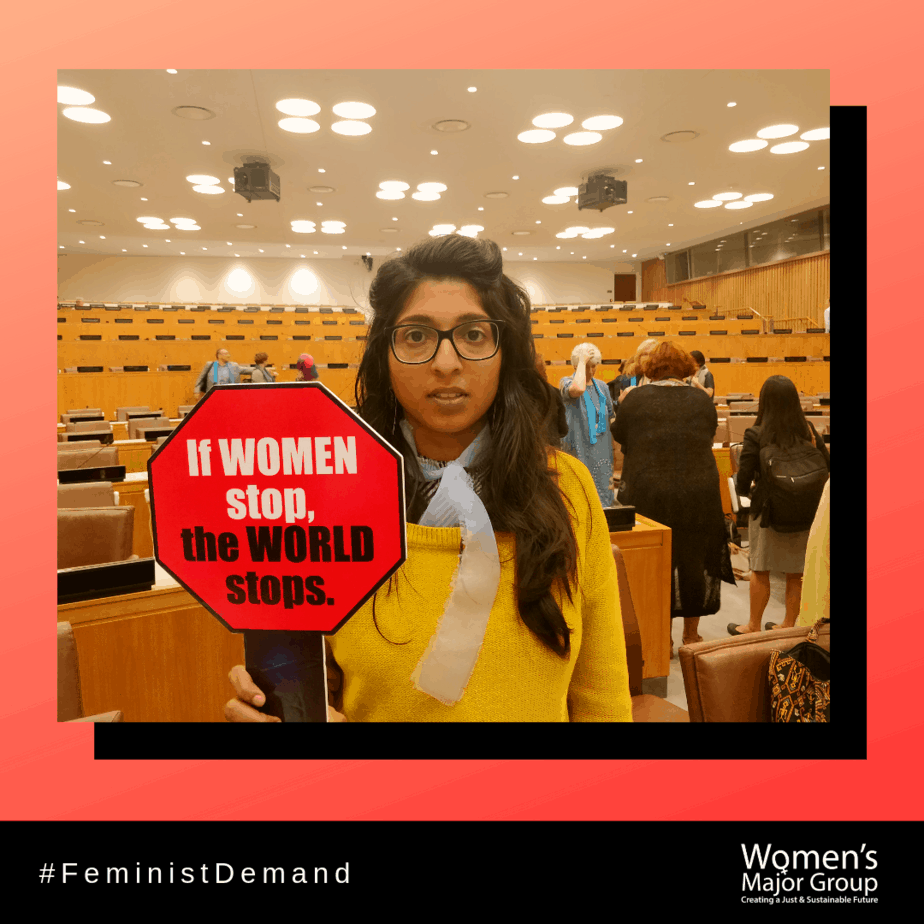 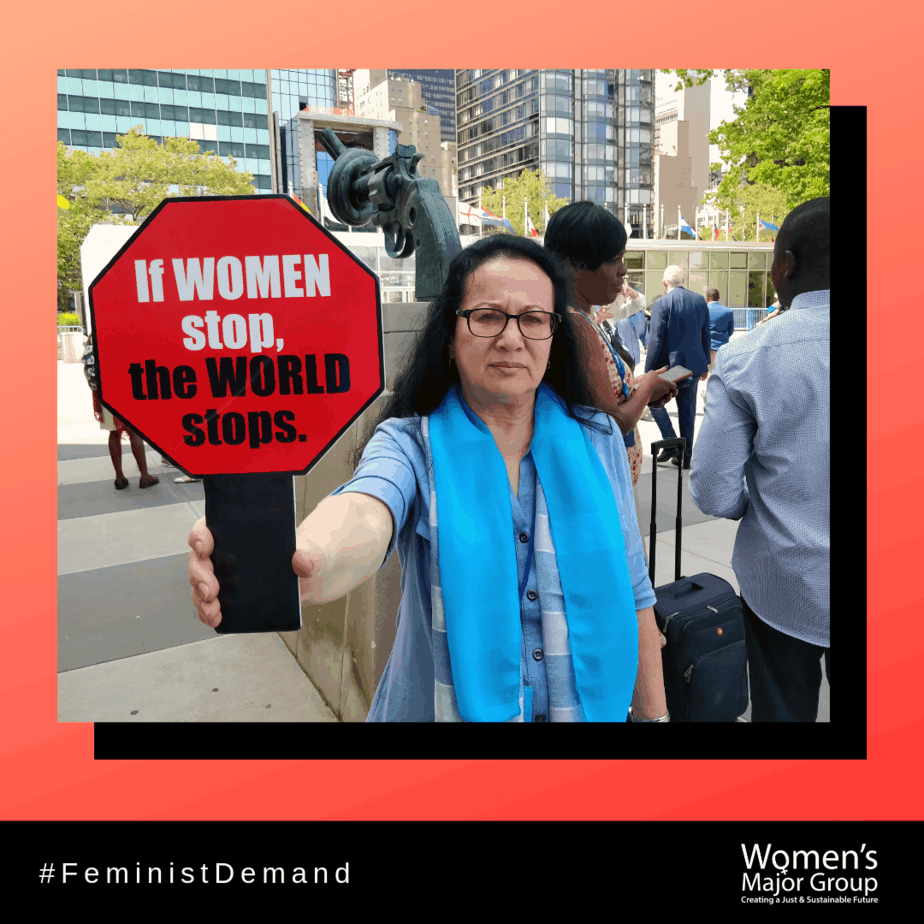 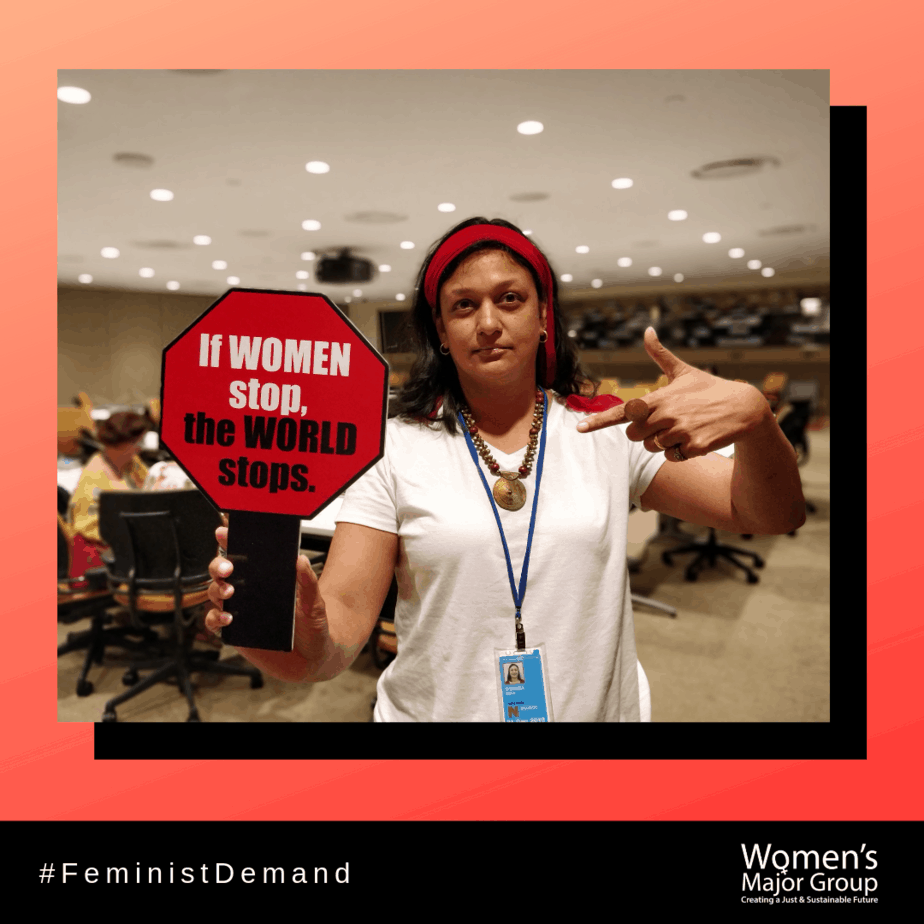 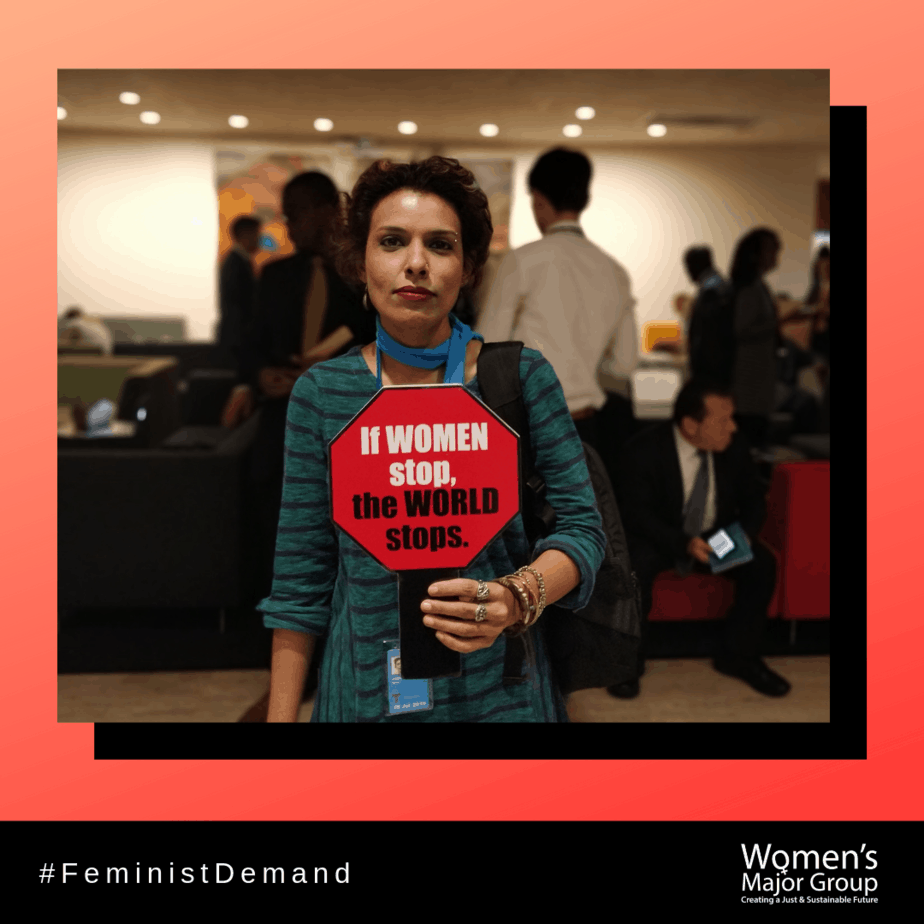 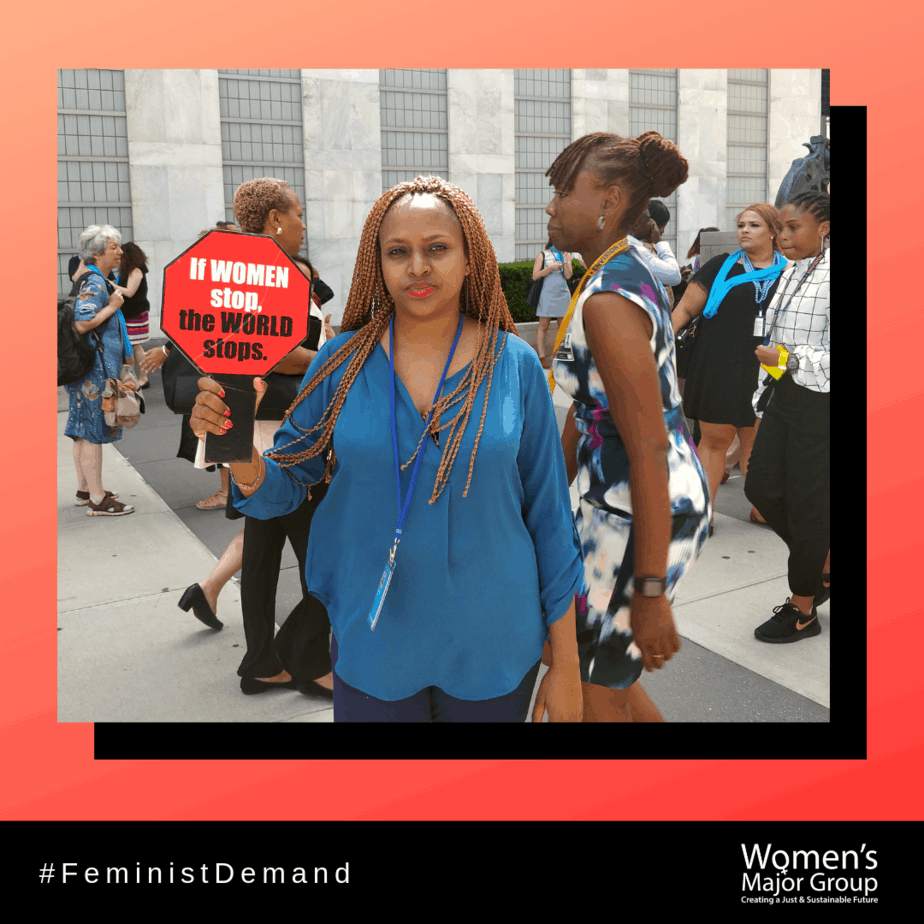 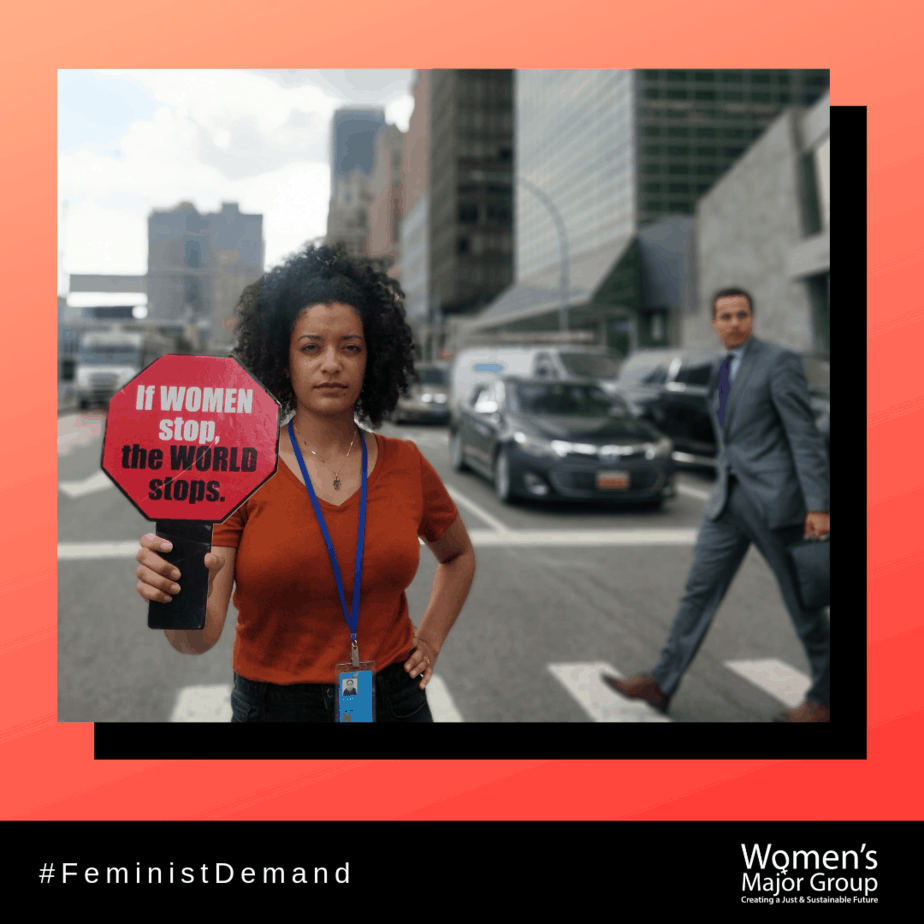