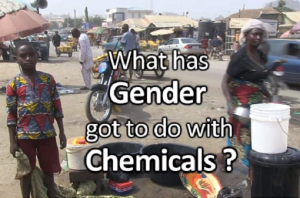 On Monday 15th of January 2018, Nigerian International TV is showing the 30 minute documentary produced by the BRS (Basel-Stockhom-Rotterdam) Conventions , WECF and WEP and made by filmmaker Laure Poinsot entitled “What has Gender got to do with Chemicals”.

In Africa’s most populated country, Nigeria, with its almost 200 million inhabitants, toxic pollution from waste is yet another challenge to society, economy and security. Nigerian International TV will broadcast the documentary film produced by WECF, WEP and Balifokus. It analyses how waste is leading to toxic pollution in Nigeria and highlights the solutions women and men are already working on.

Full PDF can be found here

The film shows how women and men are impacted by toxic pollution from waste and chemicals – partly imported illegally from Europe and America – while it visits the hidden e-waste markets and waste dumps around the country.

Although authorities have stopped already a number of container ships carrying illicit imports of e-waste, the problem is much larger, as products ‘legally’ imported and produced, such as plastic packaging and industrial products, also become toxic when burned in the open. This polluted food, air, water and agricultural soils with so-called ‘persistent organic pollutants’ which can cause cancer, and lead to the rejection of food exports from Nigeria.

The film also shows how social entrepreneurs, women’s organisations, authorities and the UN are working on solutions, such as waste collection, recycling and production of safe pesticides from the indigenous NEEM tree.

The film was screened in the presence of the protagonists from government and civil society at a high level event organised by  Women Environmental Programme (WEP) Nigeria and WECF on the 10th of January at Royal Choice Inn in Abuja, followed by a panel discussion including the Ministry of Environment and the UN. The film is accompanied by the publication “Gender Dimensions of Hazardous Chemicals and Waste policies under the Basel, Rotterdam and Stockholm Conventions”.

The film is produced as part of the project “Gender Dimensions of implementing the BRS conventions” by WECF, WEP Nigeria (Women Environmental Programme) and BaliFokus with support of the BRS Conventions secretariat and the governments of Germany and Sweden. All activities are based on the Gender Action Plan of the BRS Conventions and contribute to the Sustainable Development Goals of Agenda 2030, in particular SDG 5 on Gender Equality and SDG 12 on Sustainable Production and Consumption. Learn more about what WECF and WEP are doing towards realising gender equality within the sustainable development agenda, visit our #Women2030 website: www.women2030.org