The work of Women 2030 partner and organising partner in the Women’s Major Group (WMG) was honoured by Nigerian Television and German Welle Radio/TV. Priscilla Achakpa, Executive Director of Women Environmental Programme, was appointed as an ambassador for the TV magazine and show “Eco@Africa”.

For her extraordinary commitment to the protection of the environment in Nigeria, Priscilla Achakpa has been selected as an “Eco Hero” by Channels Television, Nigeria’s news leader and Germany’s international broadcaster Deutsche Welle.

WEP empowers women economically and politically to address the issues that affect their environment. The organization has empowered semi-rural women farmers by promoting the usage of solar dryers to dry tons of perishable crops such as tomatoes, pepper, oranges and vegetables during peak production periods.  WEP is creating awareness among women to utilise clean and affordable energy services and reduce the amount of fuelwood dependent communities which further degrade the environment while promoting food security through conservation and reduction in waste.

Priscilla has involved the rural women farmers through capacity building programmes on the maintenance of solar energy equipments so that usage of this equipment is sustainable. Realising that women are disproportionately impacted by climate change, she  involves the rural women so that they can mitigate climate change and adapt to its impact on themselves and their families.

Being selected as an Eco Hero she will engage now as an Ambassador for the TV show Eco@Africa in which her activities will be presented as often as possible.

Click on the picture to watch the first video of Deutsche Welle about Priscilla Achakpa. 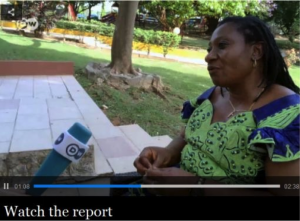